When the school-year started in September 2020, students were able to return and learn in Walworth County classrooms. SNAP-Ed funded FoodWIse nutrition educators like Lisa Krolow, however, no longer had the flexibility to join students in-person because of safety restrictions. While virtual programs were growing with prerecorded lessons and asynchronous activities, Walworth elementary teachers were looking for live instruction to keep their students active and engaged. New to teaching in the classroom, Krolow had to make her virtual classes for elementary-aged learners both engaging and informative from afar.

Krolow worked to develop sessions that allowed students to move around their physical classroom, even as the instruction was confined to a virtual platform. Using Read for Health with first graders, the sessions started with the book “The Two Bite Club.” This book set the foundation for students to participate in the club and track their own tastings on a chart with stickers for five weeks. To earn a sticker on the chart, students needed to report what they tried, if they had at least two bites of a new food, and what they thought of it. The chart created a physical document of students’ activities. 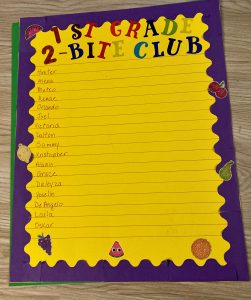 Similarly, Krolow spent time with students exploring the ideas of Food Environments. During a lesson that discusses how our surroundings can impact the decisions we make about what we do, or do not, eat, green smiley faces and red frowning faces were sent to the classroom. Using a PowerPoint presentation, students were shown images of billboards, bumper stickers, grocery stores, advertisements — all sorts of elements they might see when moving around in the real, or virtual world. As the images came on the screen, students held up faces to show if they thought the scene was one promoting a healthy environment, or a less healthy one.

Krolow found that learning could be organic, with students discussing and teaching each other from a prompt as simple as an image of a fruit or a fast food restaurant. As they thought about food environments, in particular, students were engaging in early, informal conversations that connect to work around policy, systems and environment work. Identifying aspects of their surroundings could come through even with games as simple as I-spy. In fact, that kind of attention to detail led one 2nd grader to notice the MyPlate icon on a bag of dried cranberries that most students avoided eating in the breakfasts. Once she pointed out the newly-familiar image, she got the whole class involved, making sure everyone gave the new food a try. The energy around paying attention to details, paired with the encouragement to try just two bites, had led many in the class to reduce their waste and expand their eating habits.

We teach, learn, lead and serve, connecting people with the University of Wisconsin, and engaging with them in transforming lives and communities.

Connect with your County Extension Office »

Find an Extension employee in our staff directory »

An EEO/AA employer, University of Wisconsin-Madison Division of Extension provides equal opportunities in employment and programming, including Title VI, Title IX, the Americans with Disabilities Act (ADA) and Section 504 of the Rehabilitation Act requirements.